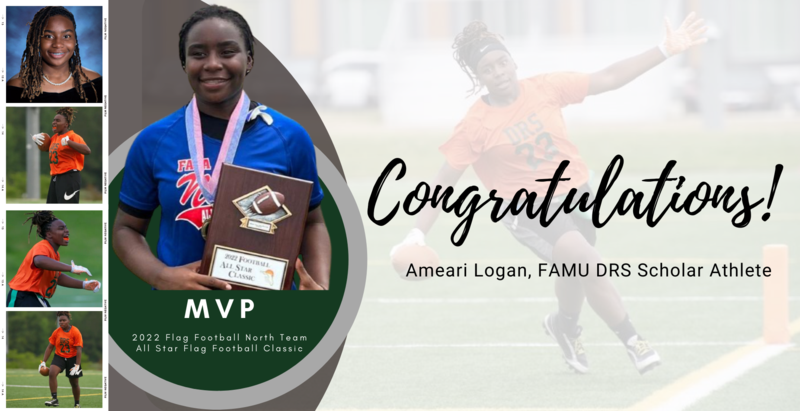 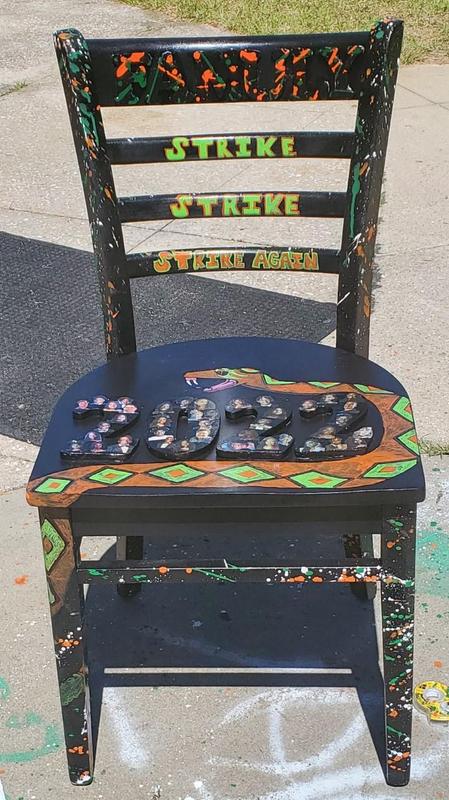 The FAMU DRS Seniors, Class of 2022, have completed their final art project, the Senior Chair. Many of the class members have signed the chair along with a few faculty members. Due to scheduling conflicts, we were not able to have a traditional chair signing party with food and celebration but the project manager, Antania Davis, and her assistant managers, Ameari Logan and Kaniyah Harris, improvised and had seniors to meet and sign without our usual Senior Chair Signing Day fanfare. The project managers were very effective in their leadership to complete the project and the seniors came together to create their legacy project. Their teachers and administrators were asked to sign the top back panel of the chair. The Class of 2022 Senior Chair will be on display in the lobby of the high school building. 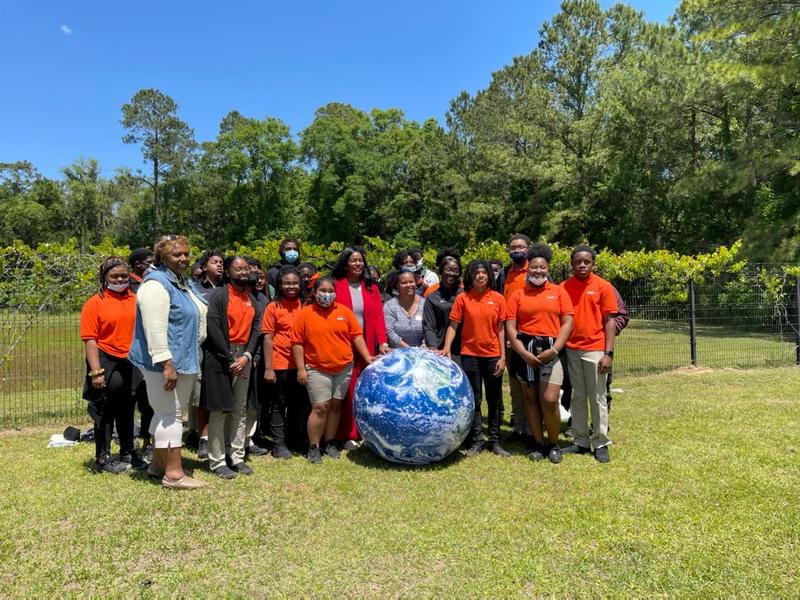 To kick off earth day students joined forces with the United States Department of Agriculture, FAMU's College of Agriculture & Food Sciences and the University Scholarship Program.

Friday, they planted trees that will grow and help bring resources to our community but that's not all that's in store for an earth filled weekend.

George Montgomery United States Department of Agriculture Program Liaison says ...he's bringing an earth day scavenger hunt to cascades park and he says its important for students to be there.

"They are part of it. The sooner you realize whats growing around you and understand how you can apply what you learned outside you also learn that in the classroom," George Montgomery, United States Department of Agriculture Program Liaison said. 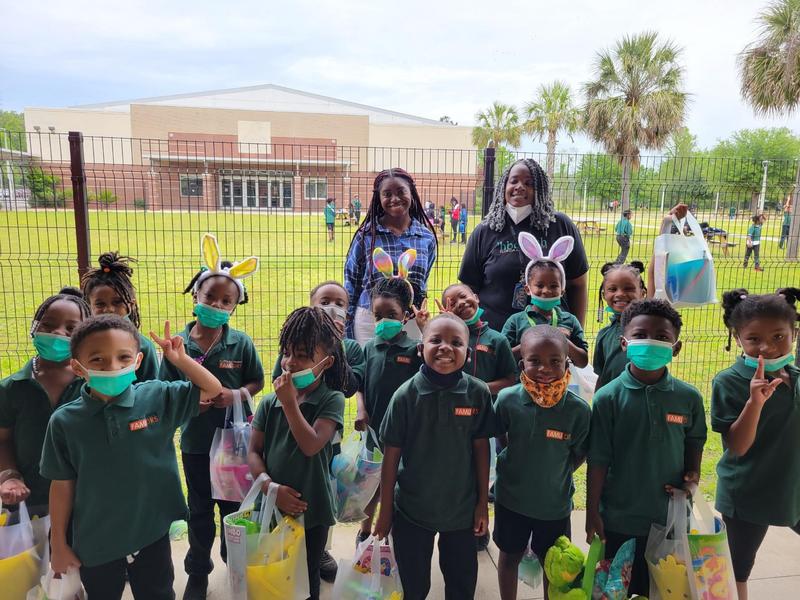 The Tallahassee Area Coalition Center of Excellence (TACCOE) Student President Breyonne Smith, joined Dr. Malinda Jackson-James today to deliver "Easter Goodie Bags" to Ms. Erin Jackson's Kindergarten Class at FAMU DRS. The students of the TACCOE selected Ms. Jackson's class for this community outreach activity. Ms. Jackson is an active, participating member of the Achiever Society and a Parent Officer. The Kindergarteners were excited to receive this surprise today!
The TACCOE, a community-based Honor Society, is under the leadership of Dr. Malinda Jackson-James. Membership Induction is open to students in grades K-11th, residing in Leon and surrounding FL counties. 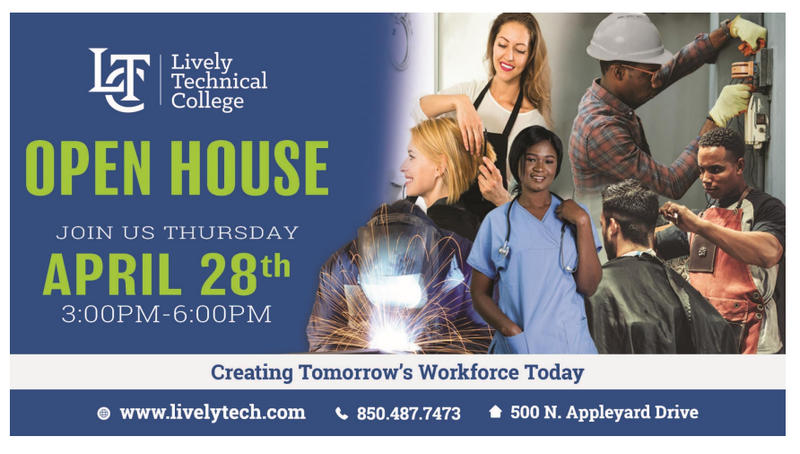 Lively Technical College will be hosting an Open House on Thursday, April 28, 2022 from 3 pm to 6 pm. 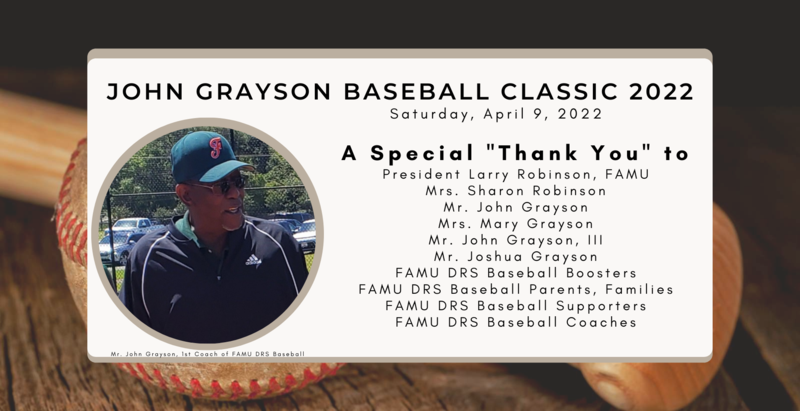 On Saturday, April 9, 2022, FAMU DRS Baseball hosted the Annual John Grayson Baseball Classic 2022. Attended by FAMU'S President, Dr. Larry Robinson, Mrs. Sharon Robinson, John Grayson (the event's namesake), Mrs. Mary Grayson, Mr. John Grayson, III, Mr. Joshua Grayson, FAMU DRS Boosters, FAMU DRS Supporters, and Parents, Families, and Supporters, and Baseball Fans.
We, FAMU High Baseball, thank all of those who came out to support the 2022 edition of this special event and our guest team, the Rickards Raiders. "The true winners," as Coach John Grayson stated, "were those players on both teams that had an opportunity to play the sport of baseball and better their skills and life." 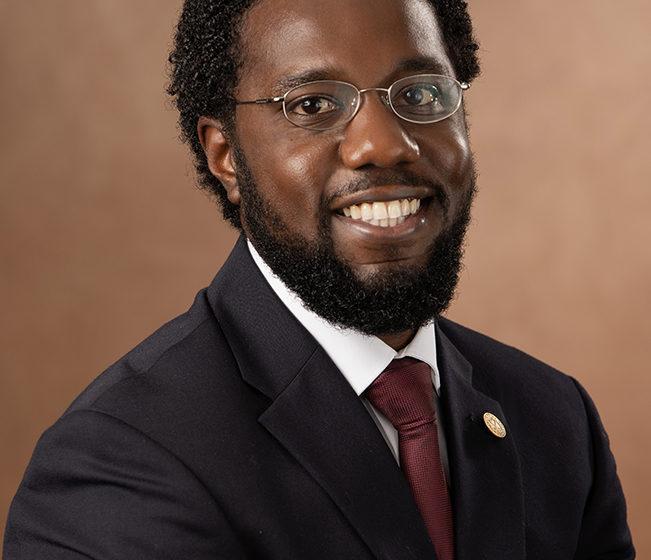 Coring’s improbable journey took him from FAMU Development Research School and to medical school in the Caribbean.


Dr. Terrell Coring at work at Medstar Washington Health Center.
“My journey started with my parents instilling the fear of the Lord in my soul,” Coring said. “With that, I prayed for my wife Inez D. Coring, PharmD., who I met in FAMU Pharmacy School, and our union has been blessed,” said Coring, who is the father of three sons – Makai is a freshman in college on a basketball scholarship, Micah a 10th grader, and Terrell Jr., who was born in June 2021.

Coring was the valedictorian of the FAMU DRS high school class of 2005. That fall he entered FAMU as a pre-pharmacy student in CoPPS, IPH. Six years later, he graduated from the program with his Doctor of Pharmacy degree.

After pharmacy school, Coring began a career as a community pharmacist. Soon afterward, he realized that he wanted to have more impact on helping patients get healthy. After a few years of retail pharmacy, he switched to clinical pharmacy at a hospital, a move which exposed him to the intricacies of health care.

Soon his curiosity about medicine began to dwarf his desire to advance as a pharmacist. So, with the help of his wife and a supportive family, he decided to pursue a medical degree at Ross University School of Medicine, on the Caribbean island of Dominica.


Terrell Coring and his wife Inez are the parents of three sons. She is also a graduate of CoPPS, IPH.
In 2017, while in medical school, Coring faced the wrath of Hurricane Maria. With water rising in his residence, he had to find safety from the pouring rain and winds estimated to 160 miles per hour.

“When I heard the roof peeling, the windows cracking, and the trees snapping; I knew that I was in a life-threatening situation. I also understood that if God spared me from the damages of the category 5 Hurricane Maria, I would still come back to this under-developed Island of Dominica to finish studying medicine at Ross University School of Medicine,” Coring recalled. “In my mind, it would be like the motorcyclist that suffered from life-threatening injuries after a motorcycle accident; yet buys another bike and travel the same road where he bled. This type of passion for medicine overjoyed me and allowed me to realize that I was finally pursuing my dreams.”

With more than 90 percent of the infrastructure damaged in Dominica, Coring’s school worked to create a plan for the students to finish their medical program. With their buildings destroyed, he and his classmates attended classes in trailers, cruise ships and temporary structures. Despite the obstacles, he finished medical school in November 2020. “FAMU College of Pharmacy was and always will be my intellectual cornerstone. This institution of higher learning is special in that it provided opportunity. Once the opportunity was seized, this place instilled in me immense confidence,” Coring said. “Therefore, the audacity to be great and to strive to become the best version of myself started at FAMU. I am proud to graduate medical school and begin residency training in Washington, D.C., all while rocking my FAMU license plate.” 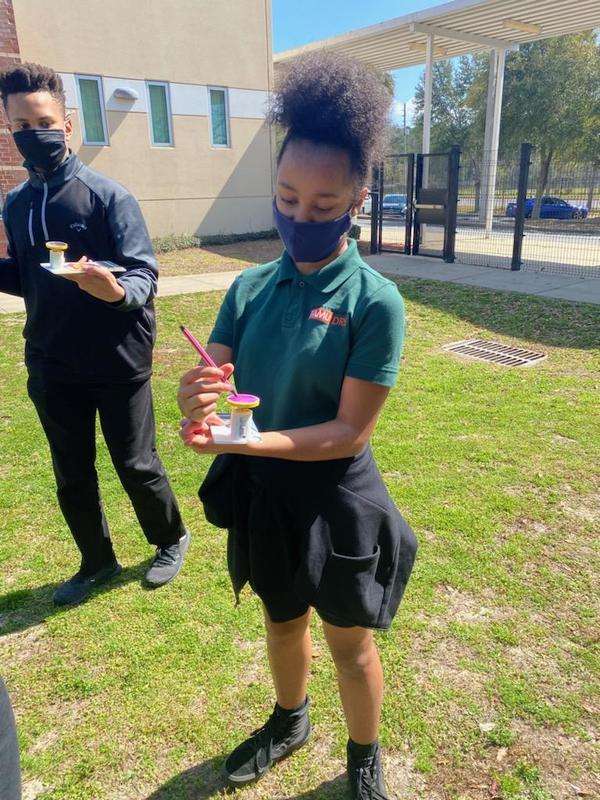 During the week of February 24, 2022, our FAMU DRS students enrolled in Ms. Hanley's and Ms. Castillo's science classes truly enjoyed and was able to learn from having Molab Science with us. Our students were able to enjoy interactive, engaging science lessons. We are hoping to have more opportunities for our students for supplemental learning activities. 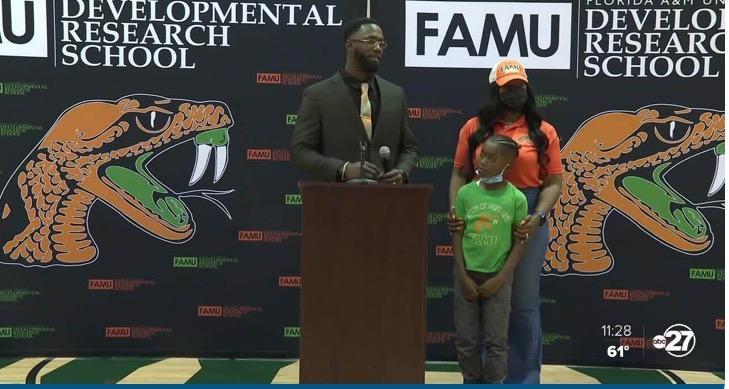 The class of 2009 graduate from FAMU DRS was announced as the new head football coach at his Alma mater Wednesday afternoon, a position he said he's thankful and honored to be in.

"Coming from FAMU High, going to Ole Miss and being able to come back here, it's something you dream of."

Williams played at Ole Miss after college. He said he's ready to share everything he's learned to make sure the Baby Rattlers get back to the standard of play they're used to.
"You dream of going and doing your own thing, but to be able to come back and give back, that's probably the biggest thing you could possibly do," he said. "I'm honored and overwhelmingly so to be in the position to do so. We will be back to the old FAMU DRS ways. The spring is a time to build, so we do have plenty of time going into next year."

Coach said his first official day as the Baby Rattlers head coach is Friday. He said he plans to hit the ground running to make sure this team is ready for spring practice.
Source: By: Alison Posey https://www.wtxl.com/sports/high-school-sports/famu-drs-hires-familiar-face-as-their-next-head-football-coach 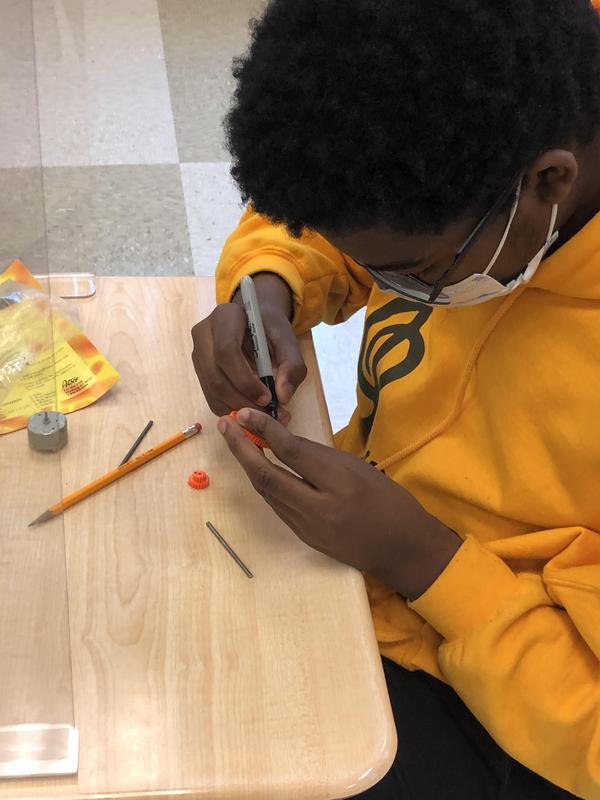 The Florida Agriculture and Mechanical University DRS Gifted Students began the Spring Semester by constructing a Solar Car. The students were first introduced to the idea by Mr. Stacy Tinner, Outreach Coordinator for the School of Architecture Engineering and Technology (SAET) at FAMU. The University also donated the car kits that the students are using.

Ms. Lindsey, Gifted Coordinator, stated that she is so excited to see the interest that the students display as they build their cars and use the sunlight to power their engines. Mr. Tinner also introduced numerous ways to produce power for the cars just in case there is no sunlight. This project also includes research, math, science, and technology.

Also assisting Mr. Tinner and Ms. Lindsey is a first-year volunteer Architecture student, Christin Williams. Miss Williams said, “I am so excited to be able to give back to the students here at FAMU DRS, and I am also glad to see their interest in solar energy as well as using their hands to build something.” Mr. Tinner echoed her sentiments and added, “I hope this partnership will continue and also bring awareness of the many opportunities SAET has to offer students in this community and abroad.” Ms. Lindsey said, “I really hope these activities and projects give the students exposure to the many fields of study that is available for them.”

The Gifted enrichment program has more projects planned for the spring to include coding drones and another rocket launch. Students meet Tuesday and Thursday from 3:15-4:15. For further information, please contact Ms. Nikie Lindsey at 850-412-5854.
RSS Feed